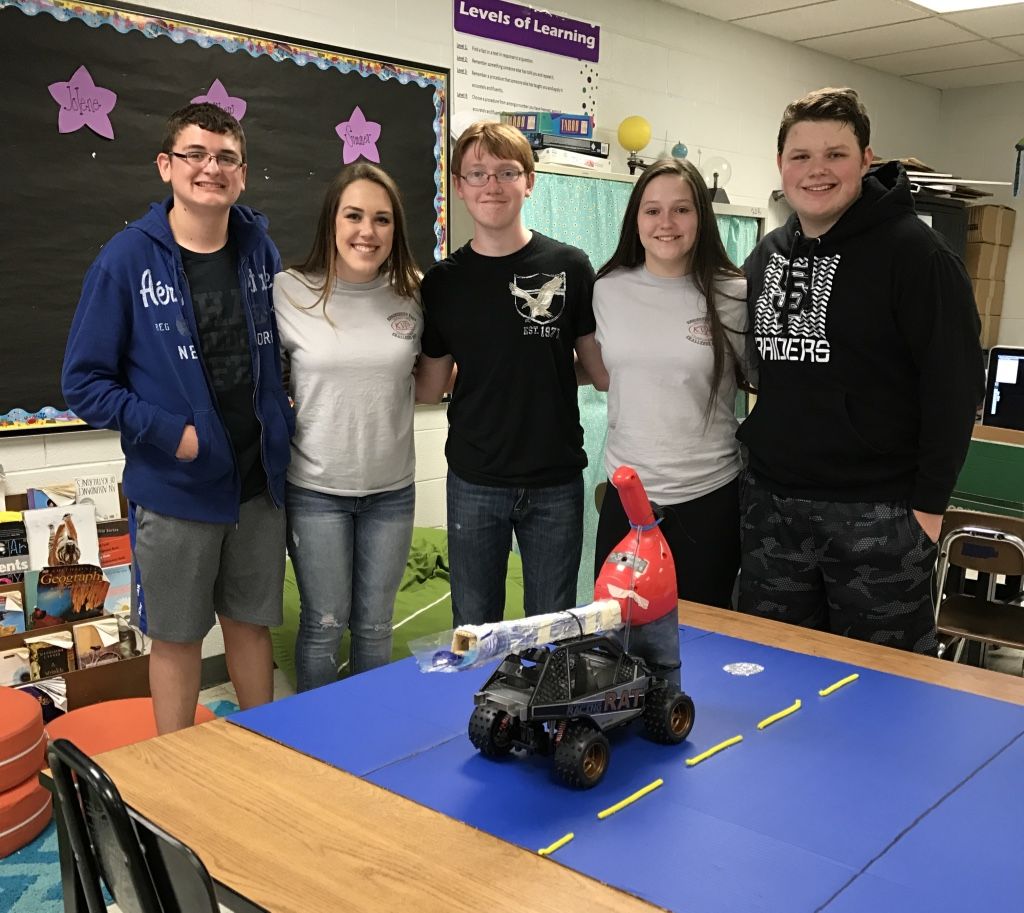 Middle school students at South Floyd Middle School in Floyd County have been exploring a variety of real-life problems in eastern Kentucky and through research and experimentation have discovered some viable solutions to the issues.  Rebecca Morrison, science teacher, and Kelsey Tackett, writing teacher, have joined forces to collaboratively provide self-directed learning opportunities for students.  Interested middle schoolers were required to complete an application process and were selected by the teachers based on stated requirements to participate in the engineering challenge.

Through brain-storming sessions, topics of interest were generated by the students and the four favorite themes were identified.  Based on their interests in the issues, students self-selected their topics and began the processes of research, experimentation by trial and error, corrections, and additional testing before producing viable solutions to the chosen problems. 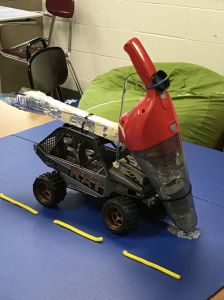 Students in Floyd County realize that one of the biggest issues faced in eastern Kentucky is the upkeep and maintenance of roadways.  After conducting in-depth research, the small group concluded that one of the main causes for this issue is rooted in the way snow is plowed during the winter.  The use of snow plow blades to scrape roads inevitably leads to potholes, which are patched during the summer only to reappear the following winter.  The invention of the “Snow Vac” would allow for the collection of snow by keeping the plow (which would have a funnel-like contraption operating as a vacuum attached to the front) inches away from the ground to prevent the scraping of the road.  The snow would be “vacuumed” through pipes and would travel into a cement truck type barrel that creates friction to melt the snow.  Melted snow would then be mixed with calcium chloride, which causes an exothermic chemical reaction that heats up the water.  The water would be returned to coat the road, thus helping melt the snow and preventing ice from forming because of the calcium chloride in the water mixture.  Students conducted the experiment with regular water, an alcohol-water mixture, and and an alcohol-water and calcium chloride mixture before concluding that the calcium chloride and water mixture maintained the highest temperature when placed in a 32 degrees Fahrenheit environment over night.  The proposed apparatus could be installed on existing vehicles and would operate from two 12-volt batteries wired together to function as one 24-volt battery.  The student group concluded that the invention will help the state save lots of money while making it safer for Kentucky residents to travel on snow-covered roads in the winter.  The students also realize that more research is needed on the effects of the diluted calcium chloride on the pavement. 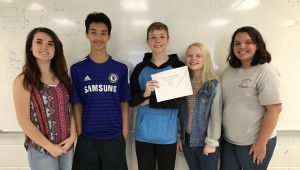 One group of students learned that flooding is the number one reoccurring natural disaster in the United States.  Kentucky residents are not immune to this weather event.  Due to the exorbitant financial claims to insurance companies, flood premiums are extremely costly.  Many people loose their homes, businesses and other personal property as the result of floods. The students conducted research and then tested for a solution to prevent damage to personal property when flooding is only four to six inches on the premises.  During the design and testing process, the students tweaked the product from an aluminum t-bar walled levee, to the current design of interlocking bins.  The final product consists of plastic bins filled with sand and water that can interconnect through the use of industrial strength velcro, which is strong enough to support the weight of the boxes and resist the flow of water.  Waterproof foam insulation is used to help seal the area between the two bins.  The bins can stack vertically as well as connect horizontally while still being portable and stable.  Students tested the product using a child-sized swimming pool.  They said they really like their idea, but they did have problems testing the model.  They believe that if their “portable levee” invention is a success, it would make affordable levees commonplace, flood insurance obsolete, and water damage a thing of the past. 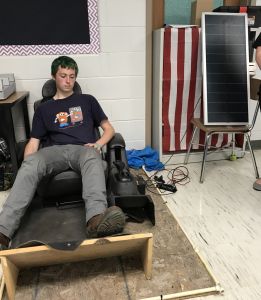 Dominick Rivera, an 8th grade student at South Floyd Middle School, has a twelve year old sister who is afflicted with autism.  The disability is characterized by the inability to process or communicate emotions and typically results in outbursts of challenging behaviors.  Amelia, Dominick’s sister, missed over 15 days of school last year due to tantrums which hindered her ability to stay in school.  While researching the topic, Dominick and his group learned that car rides and enclosed spaces for alleviating tantrums and challenging behaviors exhibited by those who experience autism are highly recommended by autismspeaks.org.  They decided to create a potential solution that would provide relief to this population.  The “Solar Chair”, designed using an actual car seat, was renovated to simulate a car ride.  A massager was installed to mimic the movement of a car in motion.  Speakers were installed to simulate the repetitive and soothing noise that is experienced during a car ride.  A solar panel that can work through lighting inside the classroom or outside receiving direct sunlight provides the required energy for the chair and thus allows for its mobility.  Through the energy provided by the solar panel, the battery is charged to power the massage apparatus and the speaker.  The chair can also work with a regular plug-in.  A virtual reality headset is available to help the passenger visualize riding down the road.  The group of students who designed this prototype are hopeful that the solar chair will help Amelia and many other students who also have autism. 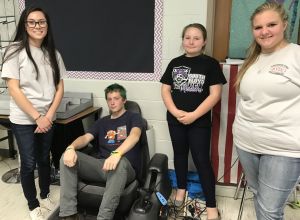 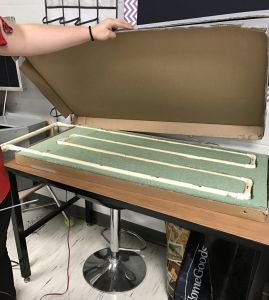 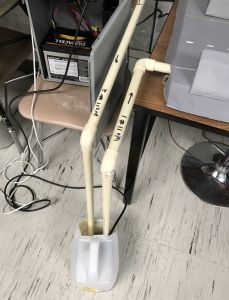 chool student, Davy Bentley, decided to create his own “Heated Bridge” project with the assistance of his dad.  Through research, Davy discovered that 24% of all crashes are weather related and that state
and local agencies in the U.S. spend more than $2.3 billion on snow and ice control every year

He also discovered from http://icyroadsafety.com/icybridges.shtml that if the air temperature is 31 degrees Fahrenheit, the road temperature will be 40 degrees but the temperature of a bridge will be only 34 degrees.  This is due to the fact that a bridge is exposed to air on all of its surfaces (top, underneath and its sides).  When temperatures drop, bridges will cool and accumulate snow and ice faster than roadways on solid ground. Davy’s solution to the problem of icy bridges is to have pipes installed under the bridges that circulate geothermal heated water from a drilled well in the ground with a pump.  A thermometer probe would be used to measure the temperature of the bridge.  When the temperature drops to 34 degrees, the pump would kick on and begin to circulate water from the earth that is naturally heated (50 degrees F to 60 degrees F).  The water would flow through the pipes underneath the bridge and then return to the ground to be reheated.  The design, which is environmentally friendly, can be powered by a solar panel but can also be wired into AC power as a back up.  Expenditures will be less than the cost of  calcium chloride and bridge repairs while at the same time reducing the number of injuries from car accidents on frozen bridges.

As students researched and worked on their prototypes over a three week period of time, they were able to communicate with a graduate engineering student at the University of Louisville who gave them tips on how to improve the models.  Several of the students discussed how there’s so much more to engineering than just “building something and putting it out there”.  They reflected on how they had to do research, create a plan, revise the design following trial and error experiments, and then how they wrote the technical reports detailing their work.  Dominick, who helped invent the solar chair, commented, “I like engineering, building things.  I think it would be a good career for me.”

Each group had $50 to spend on the materials for their design.  Some received donations from community businesses and private donors or borrowed needed objects.  A detailed budget showing the expenditures (purchased and donated) was required as part of the technical report.

Ms. Tackett explained how her “writing class turned into engineering” as the students worked on the development of their ideas for three weeks.  Even though the students had some exposure to inquiry-based learning in the classrooms,, Ms. Tackett and Ms. Morrison both said that as teachers, they “struggled with the self -directed learning”.  They commented that it was difficult not to tell students the answers instead of letting them research and experiment on their own.  It was very satisfying for them to “watch leadership emerge” among the students.  One student worked with all four groups as the “problem solver”.  They plan to do more collaborative learning projects across disciplines in the future.

Several of the middle school students who participated in the KVEC Engineering Challenge recently attended Engineering Day at the University of Kentucky.

(Details relating to the project were taken from the technical reports of each group, along with information gathered from the group presentations.)

Jacob Patton: involved with all groups to assist with problem-solving 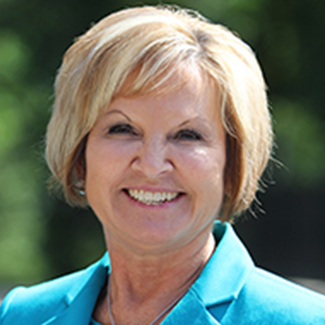 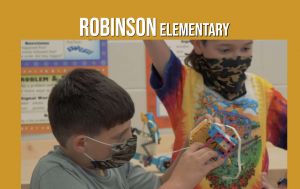 Do you like Robots? Are you interested in coding? Are you over the age of 14? Oh no, did the last one get you? Well, 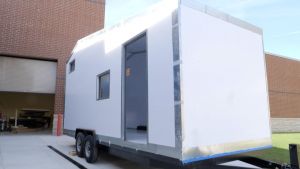 Another school joined the fray! It’s no surprise that Martin County ATC had joined KVEC’S Building It Forward Initiative. However, the building materials of their