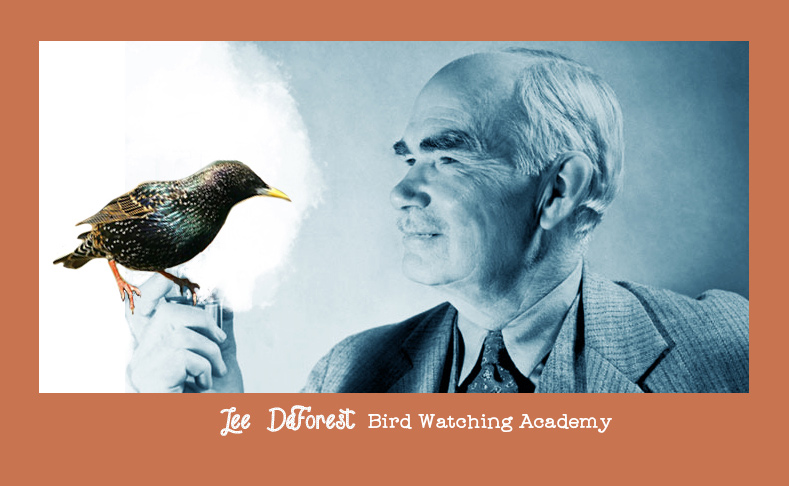 …and I don’t know if it is good or not because I have yet to read it.

I moved to Texas when I was 9 years old. My grandfather flew out to pick me up for a personal escort back to Kentucky for the summer and we spent a few days kicking around town in my mom’s brown Toyota. At some point, he asked me what I wanted to do when I grew up and I remember telling him I wanted to be a writer. Without saying a word he whipped into a pawn shop and bought me a behemoth of a typewriter, one of the old school mechanical versions that took strong fingers but rewarded you with a nice clunk on each successful character execution. If I was going to write, I needed something to write with! We then scrambled off to some local taco stand he wanted to try. This was the 80s and the Mexican restaurant trend had not made its way to Eastern Kentucky. Being a Southern California boy, we are a nomadic people, my grandfather searched far and wide for a good corn tortilla.

I didn’t grow up to be a writer but it has always been a big part of my life and I like to entertain that I have at least some ability when it comes to stringing a few words together. I am currently writing a graphic novel with my friend Christopher Epling and it has reignited a creative drive for me. I create every day with The Holler, but it is a different process. I’m a visual thinker, everything has shape and motion. Working on The Holler is a problem-solving exercise for my brain – building networks, tuning servers, figuring out what features make sense and tracking analytics, but working on the graphic novel pushed me to circle back around to a goal I have always had: write a novel.

To accomplish this I used the problem-solving model I developed while writing my coursework in college and while programming for all my technology endeavors. If the average novel is 70-80k words, how can I break that into something manageable? I knew the story I wanted to tell and I had a good grasp on who I thought the characters were, all I needed was a plan to get it all written. 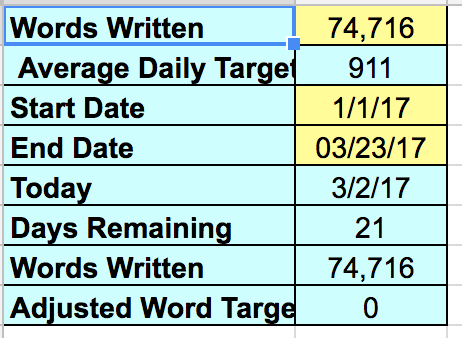 I found a Google Spreadsheet template that was set up to track a writing goal and to crunch the daily word count. I wanted to start writing on January 1 and be finished with the first draft by March 23. The spreadsheet told me I would need to write at least 960 words per day to hit that mark. I gave myself three basic rules: 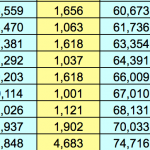 The daily count kept track of how many words I’d written that day, the total count, and how many words I was off by. Any numbers encased in parentheses showed how many words I was behind and after the second day I stayed ahead of schedule, so much so that I finished the first draft 21 days early. Boiling the process of writing almost 80,000 words down to just hitting a goal of less than 1,000 per day made everything possible and it made writing a novel seem less daunting in my mind. Every week it became a new goal to write 10k new words faster than the previous 10k. Some days were a grind and I knew everything I wrote would ultimately be edited or deleted but I kept pushing ahead. A finished first draft of a novel would be much better than all of the perfectly sculpted three pages of a novel I had written in the past.

It was not easy, and like I said in the headline, I have no idea if this book is good or bad. I stuck to my rules, for the most part, and am just now starting to read and edit the work. During a few moments of weakness, I would copy and paste a few paragraphs over to Google Hangouts or Facebook Messenger, sending the words to friends hoping they would laugh or provide words of encouragement. This mostly happened early in the process where I fought with the internal voice telling me it was ridiculous to try and write a book, that it was going to be terrible, and sending the clips to friends served as a potential confidence boost for validation that what I was writing had merit. But with the help I found on NaNoWriMo, as I progressed, I did this less and less, not because I had more confidence but because I stopped worrying about it.

The moral of this story is pretty much the same as all the other creativity posts out there – just make something, anything, and finish it. Every project you see through, every goal you are able to reach will make the next project better and you will prove to yourself that you can accomplish goals, no matter how crazy they seem in the beginning. Compartmentalize processes so you can see them for the small moving parts they are, not insurmountable challenges.

I’m currently in a great mood, I wrote a book! The next step will be grabbing some tacos and reading the thing; I’ll let you know how it goes. 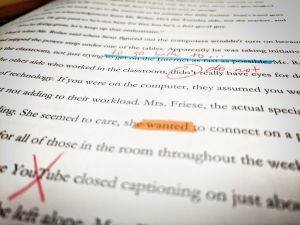 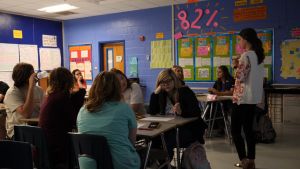 Lets take a look at this! 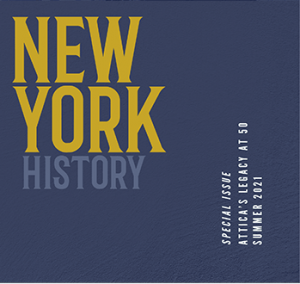